Let’s all go back to 1st grade for a moment to remember the first time we or someone we knew got caught copying someone’s homework or answers on a quiz. I suspect all of our teachers reacted the same way, since I am not aware of any kind of educational system that rewards or encourages the copying of someone else’s work in order to succeed. The copier ended up failing that assignment regardless of whether the answers they had filled in were right or wrong. I believe that all teachers tend to be so strict on this principle because it teaches us a lesson so much more important than anything we could be taught in the elementary curriculum. Copying someone else’s work in order to receive the reward of a good grade or some gold stars without putting in the effort is dishonest, unfair, and most of all, harmful to our own learning and growth. Oddly enough, it seems that plenty of photographers were never able to grasp this concept or understand this lesson.

I personally believe that the principle of art is the expression of one’s own thoughts or view of the world through their medium, which they then share with others in order to enrich their life experience or evoke a desired emotion. Photography is about taking photos of one’s own experiences, connections, and relationships with the objects and lifeforms around them. The gratification that I get from pursuing photography is to see my own growth, help others care about the wilderness more, and to know that my creations uplift others. Copying someone else’s work and claiming it as your own would rob you of feeling those things.

Before I go any further as to why I believe that copying is self detrimental, I feel it important to make it clear  that I don’t agree with the artists that are so protective of their work that they scorn or shame anyone that produces anything relatively similar or comparable. I believe it is important to look at other photographers’ portfolios in order to be inspired and receive new ideas for one’s own growth and progression. It is impossible to create anything completely void of any kind of influence from another person before you. It always makes me happy when I’ve inspired an artist to see something differently or have an excitement to capture a certain subject or location because of my photographs. That being said, even if you are not blatantly copying someone’s image in order to create an exact replica, as long as you are consciously creating something that came into your head because of someone else’s original idea, I feel that credit to that artist is still due. However, I do understand that this is just a personal feeling that I have, that there are likely to be exceptions and it may not be universally necessary in every circumstance. 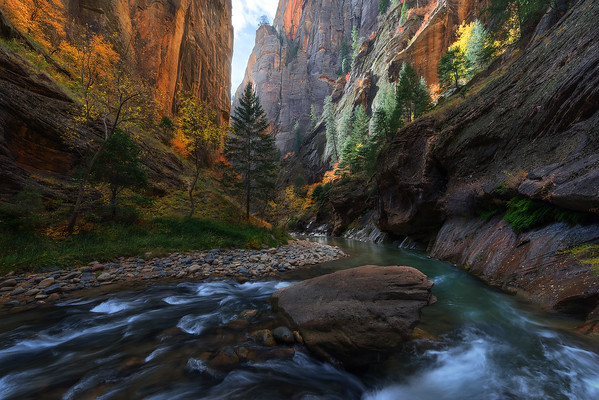 Both the photographer that shows up to a location and thinks “nothing else can be done so I will do the same” and the photographer that thinks “nothing else can be done so I will do nothing” are missing out on a huge opportunity for personal growth. These are the kinds of situations that spark creativity and challenge us to think outside the box. I don’t think it’s right to avoid locations you have a connection with solely because you believe that everything has already been done. These places should be viewed as opportunities to prove ourselves wrong, to become conscious of new ideas and techniques, and where we are really stretched to connect to something deeper. Like I’ve said before, photographers that think you can only create never before seen imagery by visiting never before seen locations, are greatly limiting themselves. I feel sorry for these artists who are so small minded and don't believe they are creative enough to come up with at least their own rendition, twist, or spin on an already popular location. Be brave enough to try, I think you will be surprised to see how often you triumph.

As for the photographers that think they are not capable of creating anything new, so they just choose to do what others have already done and received admiration for, I sense laziness as well as the lack of a spine strong enough to withstand potential criticism for something they created with their unique and personal thoughts. They would rather go for the reward without the struggle, the victory without the battle, by emulating something that has already been successful and therefore will likely receive praise again. If it isn’t about this, if there is some other motivation, then I am oblivious to it.

When you copy someone’s work and refrain from giving them credit for it, you are exploiting that artist, that subject, that artform, and your fan base in order to receive recognition. You are getting the reward without putting in the work which is disrespectful to the original creator. It shows you do not value their art nor appreciate the effort they put into creating it. You disrespect the landscape as well as the artform because the image was not born out of a personal connection or relationship with it since the thoughts that led to that photograph are not your own. How would you feel to know your companion was just copying love letters they found on the internet instead of writing out their own feelings they have for you? You are lying to your fan base or following by misleading them that the ideas you have presented are your own, and your work is a product of your personal imagination. Would you want to hire a doctor that you know obtained his degree by cheating on all of his assignments through medical school?

I have heard the argument time and time again that copying someone’s work, techniques, or style, can be a way of personal learning. I don’t disagree with this, and I believe that it can be valuable to one’s own understanding of what is possible within the artform. I intentionally copied compositions, processing, and many other things early on as a challenge to see if I could do it too. However, I didn’t then post these images and lead people to believe that they were my own creations. I used them purely for my own growth and greater understanding of technique.

In order to avoid coming off as an elitist, a bully, or self righteous, I will admit that I did once take a photo, that was not of my own invention in order to have something to share that I knew would receive recognition. I am not afraid to admit that. However, this was several years ago before I cared much about the artform. Knowing that was wrong to do, I quickly moved on from that approach to photography as I didn’t feel the same kind of gratification as I do for sharing something with the world that I can call my own, and these copied images no longer live in my portfolio.

Do I still sometimes see images that make me jealous? That make me wish I could call them my own? Absolutely. Every day I see work that is so awesome I wish it belonged to my own gallery. But I refrain from going out and trying to replicate it because again, like I said, I don't receive the same kind of gratification as I do when I create a product of my own imagination.

I'll make myself explicitly clear. By copying someone's photo I am referring to replicating their composition. Still, I have heard photographers argue that even with the same composition no two photographs can be exactly the same. Well in some cases that may be true, but after you have mimicked all of the decisions and choices that another artist already made such as composition, framing, arrangement, etc, the only other variables are ones that are not in your control anyways, such as light, weather conditions, etc, and I don’t see many photographers trying to take credit for the things that nature does nor would it make any sense to take credit for things happening that we have no control over.

In some situations, copying can be more ambiguous. In those cases, only you can know if you really invented something using your own imagination, or if you tried to imitate someone else's vision. Of course there is always the possibility of mere coincidence, that you and someone else had the same vision before you saw each other's images. Only you can judge. Be integral.

I do believe there is value in originality and I am standing up for the artists that I respect, whose work deserves to be admired, not ripped off. Copying without giving credit where it’s due is wrong, just like your 1st grade teacher taught you. It doesn’t matter what the subject is, the principle will always be the same. If you do however feel some kind of gratification by going out and looking for other people’s creations and recreating them yourself, then that’s fine too. But at least have the respect for the art, the land, and for others as well as yourself, to not try and claim them as your own.